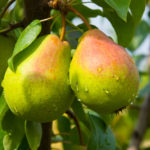 OH stands for “Old Home”, a name given to a seedling selection discovered in Illinois by Prof. F.E. Reimer of OSU. The “F” stands for Farmingdale, the town in Illinois where Reimer discovered the second Bartlett selection. Old Home and Farmingdale were crossed by L. Brooks of Oregon and the resulting offspring were fireblight resistant, self-fertile, vigorous and had good cold hardiness, making it desirable as a rootstock and receiving a patent in 1960.

OHxF 87™ is considered as a semi-dwarf tree;

OHxF 87™ is one of the best producing rootstocks of the OHxF series and was selected for this very reason;

OHxF 87 should be planted 6-8′ between trees within a row;

It gives early vigor and is more precocious than OHxF 97;

It is not good for interplanting with less vigorous trees due to competition for light.