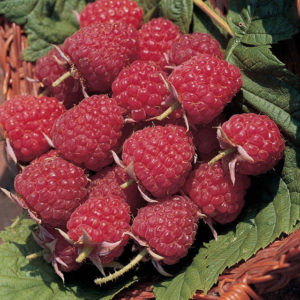 Autumn Bliss is a remontant raspberry variety that bears fruit from late July to early October. In September, the raspberry bush is the most productive. Berries are large or medium in size, about 3.3 grams, red or dark red in color with a pleasant aroma, well stored. Throughout the fruiting season, the size of the berries practically does not change. The branches are strong and need only light support.

The variety is remontant, i.e. fructifies twice a season (summer and autumn) on the shoots of the current year, but summer fruiting is not as plentiful as autumn. Remontant varieties are often grown for one bountiful, autumn harvest. To do this, in the fall, when the bushes bear fruit, all shoots are cut to the ground. With such pruning, many strong shoots appear next year, on which many large berries are formed; to get a summer harvest, all annual shoots are left in the winter, which will become biennial next year and bear fruit by about mid-June